Review: Can You Forgive Her by Anthony Trollope 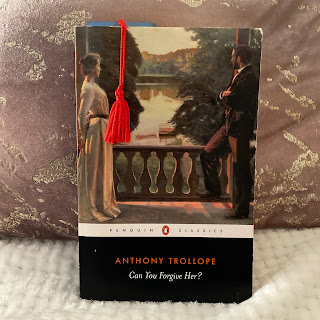 The first novel in Sir Anthony Trollope's beloved Palliser series is commentary on Victorian society and the lives of the women in it. The main plot tells the story of Alice Vavasor, the young lady the reader is asked to forgive. Previously engaged to her roguish cousin George, Alice has recently made what seems to be a much better match in John Grey, a gentleman in every sense of the word. It is a shame then that John Grey isn't terrible exciting, that George's sister Kate is prone to meddling and that now he is a little older George has lofty political aspirations that Alice approves of. All of which leads Alice to break things off with John and rekindle her engagement to George much to the disgust of all of her relatives except for Kate. From there, things go from bad to worse as George's true colours become increasingly obvious.

Running parallel to this story is that of Alice's friend Lady Glencora who has to choose between a penniless rogue and an aspiring politician and her boredom following her choice to marry the politician. Finally there is the more comical story of Alice and Kate's aunt, a relatively young widow who finds herself pursued relentlessly by two men. Through these stories the author probes at the limited agency that upper class women had in the Victorian era and the moral codes of the day. The second half of the book also takes a glimpse into British parliament, where money and corruption are rife and careers are built on having the right connections rather than having decent ideas or being of good character. (Perhaps not so different from many parliaments and legislative bodies around the world today.)

Overall, this was an enjoyable read, filled with interesting characters and situations, though I did find myself losing some enthusiasm partway through. Trollope creates an intimate account of the social and political world of the time and place that he lived in, though the novel feels overlong in places, particularly during the story arc featuring the love triangle between Mrs Greenow, Captain Bellfield and Mr Cheeseacre. Alice herself isn't always the easiest of characters to empathise with, though she is shown to grow up over the course of the novel.

Anthony Trollope Can You Forgive Her