Review: Anything But Fine by Tobias Madden 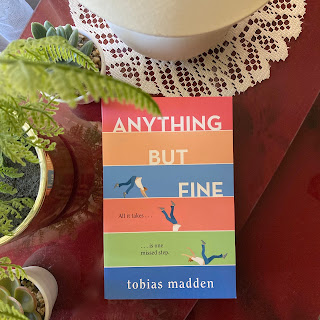 What happens when everything you live for is taken from you in a single moment? That is the premise of Anything But Fine the debut novel from Australian author Tobias Madden. Luca has his life sorted out. He has a scholarship to the most prestigious private school in Ballarat, he has a great group of friends who are all comfortable with his sexuality and he has an important audition for the Australian Ballet School, which, if successful, will cement his career path as a dancer.

Then one single moment, one small lapse in judgement, changes everything. Luca's broken foot, fixed with plates and screws, means that he can never be a professional dancer. Then he loses his scholarship, his friends and his relationship with his dad--though deep down they care about each other--isn't going so well. At least there is one moment of hope, when he meets a cute boy at physio. And they will be attending the same school. It's just a shame that Jordan is one of the most popular boys at school and the kids at his new school aren't exactly accepting of boys like Tobias ...

This was an entertaining story of loss, love and acceptance. What could have been the premise of a teen coming out novel develops into something much more under the deft hand of Tobias Madden. With Luca we have a central character who has been open about his sexuality for years, who is grappling with other problems, such as the loss of a longed for future career, the confusion of changing to a new school where he is neither welcomed nor accepted, the loss of his friends and the gaining of two new friends--Jordan who he is crushing on, and Amina, a bright and bubbly straight-A student, who is misunderstood by her peers and relegated to outcast status. Each of the three main characters have a pleasing amount of depth to them. And we also see the agony of Luca's crush, one which is reciprocated, but by a boy who isn't quite ready to come out yet, and who knows that by doing so, he will probably lose all of his so-called friends and be subject to relentless bullying. Sadly, this last one is a realistic scenario that many in Jordan's situation will know and understand.

Running parallel to these things is the story of Luca's dad, who found himself a widower at a relatively young age and left to raise his two year old son. In the years that have followed, he has done his best to raise his son, whilst struggling to grieve for and to accept that his much-loved wife is gone. As Luca cannot remember his mother at all, this becomes a huge point of tension, especially during scenes where his Dad tries to suggest that Luca's dancing career may not be entirely over.

Overall, Anything But Fine is well-written and contains a pleasing amount of complexity and depth, and can most definitely be enjoyed by readers who are outside of the target YA audience. Tobias perfectly showcases the difficulties of grieving and the complexities of adolescence, coming out and first relationships.

Anything But Fine Tobias Madden

Ethan said…
There seems to be exquisite depth and layering to the characters in what would be an otherwise straight forward premise. Thanks for reviewing this one. I'm adding it to my 2023 TBR!
3 January 2023 at 15:21