Review: The Guy, The Girl, The Artist and His Ex by Gabrielle Williams 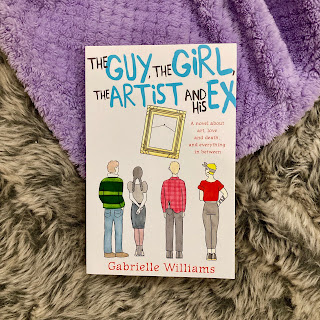 Aussie author Gabrielle Williams takes a true--and bizarre--event and unsolved crime and shapes it into a story of love and loss. In August 1986 a group purporting to be the Australian Cultural Terrorists stole Picasso's Weeping Woman from the wall of the National Gallery and held it to ransom. Their demand was increased funding to the arts. The painting was eventually discovered, undamaged in a locker at Spencer Street Station. The perpetrators have never been caught, despite a large scale investigation.

The Guy, The Girl, The Artist and His Ex offers a wholly fictional, and very entertaining, account of how the painting could have been stolen, told from the perspective of four characters. There is Guy, who is in his final year of high school and set to fail his exams, Rafi who came to Australia from Brazil with her mother to live with her uncle after a terrible event, Luke an artist directly connected to the crime who is too selfish and immature to sort out his many interpersonal problems and Penny, a single mum and Luke's long suffering ex. Each of their lives, wittingly and unwittingly get caught up in the theft of the painting and the results are surprising, clever and sometimes a little bit sad.

Although I loved the concept of this one, I found parts of the story were let down with the blending of characters and themes suited to a YA novel, and other characters, dark humour and themes that belonged in a more cynical adult world. That said, this is an interesting depiction of Melbourne in the 1980s and a very clever retelling of a truly bizarre crime.

Gabrielle Williams The Guy The Girl The Artist and His Ex