Review: The Boy From Boomerang Crescent by Eddie Betts 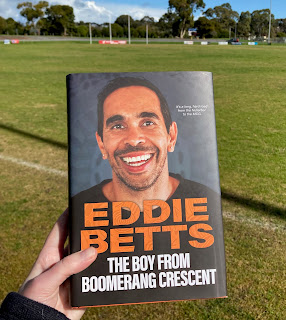 There is no denying it. Eddie Betts is a true AFL legend, having played a whopping 300 games (or possibly more,) and kicking more than 600 goals during his time with Carlton and the Adelaide Crows. His goals were often spectacular, some kicked from odd angles which led to a portion of Adelaide Oval being lovingly renamed Eddie Betts pocket by fans. In later years, he became an advocate for Literacy and Learning through Eddie's Lil' Homies a clever series of children's books which also promote kindness, acceptance and equality. (Read more about Eddie's Lil' Homies here.) The Boy From Boomerang Crescent tells the full story behind the footballing legend. Growing up between Port Lincoln and Kalgoolie is tough, and more so for those who are still feeling the impact colonialism. Sadly, racism and police targeting Aboriginal people is a way of life (so much so that when Betts was about eight or nine years old, he was wrongfully arrested when police apparently mistook him for his father--let that sink in for a moment.) It is a love of sport that will eventually take Eddie Betts to the top, but the road is not an easy one, when it requires moving across the country and feeling like an outsider. Fortunately for him, his teams and the many people who have been inspired by him along the way, Betts persevered.

Playing football at elite level isn't without its challenges, whether it comes in the form of racist hate mail, changing teams (and cities) midway through his career, juggling football with the pressures of family life and a growing family, and receiving the devastating news that Phil Walsh, his coach at the Adelaide Crows had been murdered. Betts is upfront about the impact of these challenges, without weighing down the memoir by becoming overly sentimental. I also found many of the accounts of racism to be quite an education, and now have a greater understanding of why it is so vitally important that football clubs employ Aboriginal Liaison Officers.

Obviously, The Boy From Boomerang Crescent has been spoken about quite a bit in the media, and in particular, in Adelaide, during the past few weeks mostly because of Betts' open and honest account of what happened at the controversial 2018 pre-season camp. That particular chapter makes for tough--but compelling--reading. It is difficult not to get angry at the cult like conditions that the players were subjected to, and the utter irresponsibility of the camp.

The Boy From Boomerang Crescent is interesting, insightful and, ultimately, an honest memoir of a remarkable footballer who, will hopefully inspire many generations to come.

PS I didn't want to add this in the body of the review as it is largely irrelevant, but as I am aware that some of you might be questioning why, after running this blog for over ten years I suddenly decided to review a sports memoir. The answer is this One: I can read and review whatever I like. Two: I've been an Adelaide Crows supporter since the club made their AFL debut in 1991. Granted, I generally don't get caught up in football politics, and rarely publicly comment further than a, 'Great game,' or 'Better luck next week/season,' but I felt this particular book was important and worthy of a review.