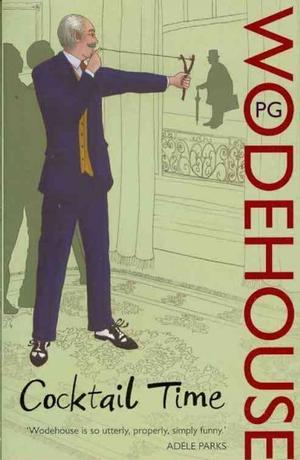 Wodehouse's beloved Uncle Fred, or Earl of Ickenham as he is also known, is back in London and causing trouble for well, everyone. And it all begins when Uncle Fred convinces his grouchy in-law, Sir Raymond Bastible to write Cocktail Time, a scandalous paperback that the critics hate and every person in England is desperate to read. And now Bastible wishes to run for Parliament and wants no one to know that he is the author ... From there begins an unpredictable comic adventure as a number of characters find their lives impacted by the publication of the book, from the insipid nephew who is hired to pretend to be the author, a literary agent who just happens to be Bastible's ex-girlfriend and a pair of confidence tricksters from the United States who can see a chance in there to make money somehow. Meanwhile, other characters are having a few dramas of their own ... and it may just be the man who started it all (and a certain book,) who can solve things.

This was an entertaining and lighthearted read, though it doesn't really reach the classic status that has been attained by many other Wodehouse novels. As always there are some clever turns over phrase and some jolly entertaining but over the top situations. Fans of Jeeves and Wooster will be amused to see that both the Drones Club and Sir Roderick Glossop both get a mention in this one.

Overall, a fun read though perhaps not terribly memorable.