Review: Jeeves and the Feudal Spirit by PG Wodehouse 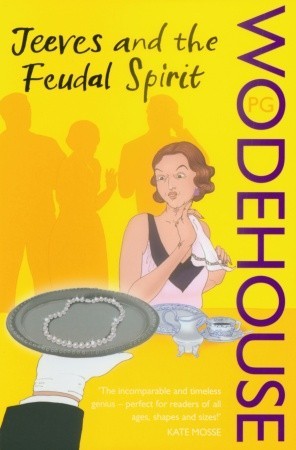 There is nothing like a PG Wodehouse novel to brighten one's spirits on an otherwise dull day and Jeeves and the Feudal Spirit is no exception. Originally published in 1954 and number 11 in the Jeeves series, most of the characters including the minor ones are, by now, well and truly established. Consequently, the reader knows that that they are to be entertained by a story of Britain's bumbling upper classes and it is just a question of who features in this volume to create a bit of trouble for Bertie Wooster, what this will lead to and how Jeeves is going to get him out of it.

Jeeves and the Feudal Spirit opens with Bertie opting to grow a moustache that doesn't suit him, much to the annoyance of Jeeves who strongly advises against it. Unfortunately, the moustache soon catches the eye of Lady Florence Cray, a writer who is currently penning a serial for a magazine owned by Aunt Dahlia that she is hoping to sell for a hefty sum. Worst still for Bertie, Florence is presently engaged to Cheesewright, a brutish man who would beat Bertie to a pulp, were it not for the fact that he is relying on Bertie to win the darts competition for the Drones club. Meanwhile, there is a little spot of bother with some missing pearls that could be the undoing of all of Aunt Dahlia's plans to sell the magazine. Of course, it is up to clever butler Jeeves to save the day.

This one was entertaining enough, though quite honestly, I felt that it was a fairly tired instalment in the series. There were a couple of loose threads that were not tied up at the end of the novel. That said, it was still easy enough for me to enjoy this one with its the over-the-top situations, the clever use of the English language for maximum comic effect. And, obviously, the point of these novels is to entertain and not to inspire great philosophical discussions or pages and pages of analysis from readers.