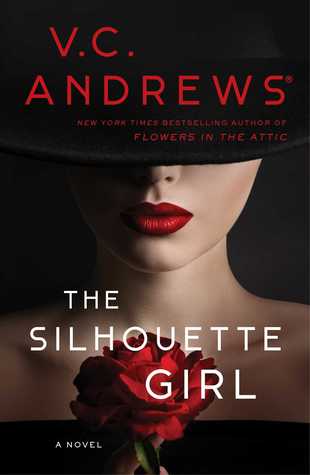 The unreliable narrator genre gets the V.C. Andrews treatment in The Silhouette Girl, a lacklustre and slightly crude tale of a nurse who is being stalked by someone who identifies herself only as Scarletta. Pru Dunning is, a successful nurse who is living and working in LA. The future looks bright--Pru is good at her job and well-liked by her patients. She is forming a serious relationship with a lawyer whom she met on the job and has no reason to be unhappy ... but for the fact that she keeps receiving creepy answering machine messages from someone called Scarletta who seems to know far too many of Pru's secrets.

Turn to the second chapter and we meet stalker Scarletta as a teen, a poor little rich girl, with a domineering mother whose boorish ways make Scarletta and her father a laughingstock around town. Scarletta's story mostly revolves around her mother's sudden departure and her father's creepy behaviour. The story arc is typical VCA ghostwriter fodder, with long and dull depictions of a smothering, upper middle-class parent whose sole purpose is to make life harder for the main character and to make herself and everyone around her look, quite frankly, like complete fucking morons. Thanks to her mother, Scarletta is unnecessarily humiliated at school. (And what the fuck is it with VCA characters being unpopular and teased at school. Sure it worked in Dark Angel, and it made for a very creepy subplot in Petals on the Wind, but everything after that has just felt like the events of Dark Angel being regurgitated and without Heaven's infamous act of revenge.) I get that as readers, we're supposed to feel sorry for Scarletta, but honestly, I'd have a lot more sympathy for a character who actually stood up to her smother, I mean mother. Take for example, in the writings of the actual VCA, where four year old Carrie kicked and bit her domineering grandmother. Or to go further afield, take for example in Roald Dahl's Matilda the tricks the titular character plays on the adults who make her life a misery. Those moments satisfy the reader's appetite for justice, while encouraging them to read on. After all, it's far more fun to read about a character who stands up for herself, and is cunning enough to set traps for those who hurt her.

Meanwhile, Pru has problems of her own, first with her stalker and then with a creepy ex patient who does creepy things to her. Creepy things that she just sort of brushes aside, as though date rape is something that happens and she just has to deal with on her own. Meanwhile, her relationship with lawyer Chandler is becoming more and more serious, which is fortunate for her, seeing as she is going to need him to help clean up when all the shit that has been stirring eventually hits the fan. Which it does ... in a fairly underwhelming way.

There is also very little in the way of closure at the end of the novel, and if not for a note in the back explaining about certain medical issues, I probably would have been left guessing as to what was going on. There is also a little swearing within the narrative, which I was not offended by, but I did find surprising, given that the novels are usually fairly clean in that respect.

As for the writing itself, most of it feels as though it is full of padding and offers what is, quite frankly, an extremely unrealistic portrayal of what it means to be either a young woman living and working in a big city, or a teenager growing up in the early twenty-first century. Parts of the novel are unnecessarily crude, which, unfortunately seems to be a recurring theme in the ghostwriters work. I've noticed this many times before in previous V.C. Andrews titles that are written by the ghostwriter--teenage sexual development is never handled with any kind of sensitivity or tact, and is often used as a vehicle for shock or gross out value. In this instance, we have Scarletta being pestered by a girl in her class to come to a private party, where the intent is for the two girls to hook up with two boys from their class. The party never eventuates, but much of the narrative is spent depicting Jackie's crude sexual comments, ones which are neither amusing nor realistic. Running alongside this is the subplot about Scarletta's father and his crazy pedophile fetish that involves nightgowns, one which echo that of Tony Tatterton in the Casteel saga. Or at least the ghostwriter version of Tony Tatterton. VCA never mentioned a nightgown in Dark Angel and it is hinted at that Heaven Casteel was conceived in Tatterton's study.

At this point in time, I think the real mystery is why I keep reading these novels. Certainly, the magic of V.C. Andrews work, gothic romances set in the second half of the twentieth century that always somehow featured strong and resourceful adolescents who were in dire circumstances, disappeared long ago, at about the point in time when the name of the author (who passed away from breast cancer in 1986,) became a franchise, with novels written by a ghostwriter and their plots adapted to suit whatever happened to be current trend. When Twilight was popular, we got a Vampire themed VCA novel. When mini-series were popular, we got three mini-series.  When a series of TV movies were made based on the Dollanganger Saga, we got a series of spin-off Dollanganger novels. It's a far cry from the days when V.C. Andrews was considered to be the leading writer of contemporary gothic novels.

And with a new series of prequels to Flowers in the Attic to be released later this month, I have no idea when or how this is going to end. Certainly, the preview to Beneath the Attic that is currently available on Amazon does not look promising, and nor do a number of the early reviews.

Considering the poor writing, it is doubtful that The Silhouette Girl would have even been published if it were not for the name on the front cover--a name that belongs to a woman who died more than thirty years ago but whose legacy has been spoiled by a market saturated with second rate and trashy novels.