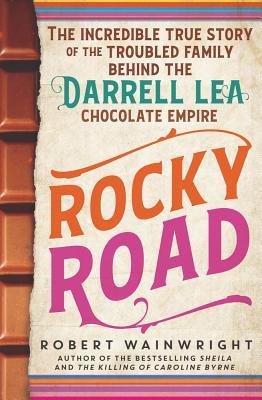 Growing up, it was impossible not to have heard of Darrell Lea and their lovely range of sweets. There was a Darrell Lea store in my local shopping centre that for many years did a roaring trade. There was an even bigger--and better--Darrell Lea store in Rundle Mall that sold every type of sweet imaginable, or so it seemed. It was always such a treat deciding what to buy--whether you wanted Rocklea Road, BBs or one of the delicious but less famous treats like their own version of coconut ice. What I had never heard, until now was the story of one of the branches of the family behind the empire, a large and eccentric Melbourne based family headed by Monty and Valarie Lea, who during the 1940s and 1950s adopted three children to be playmates for their four biological children. Rocky Road is the story of those three adopted children and their relationship with their adoptive mother.

Biographies are a terribly tricky thing to write as different people will often remember different things and events differently. For the three children adopted by the eccentric family behind the famous Darrell Lea empire, they did not recall the same happy childhood as the four biological children of Monty and Valarie Lea, and all three went on to have turbulent adult lives, which are recounted in this volume. It's a heartbreaking read, after all these are people who are struggling to understand their circumstances and who must surely have felt second best whether their adoptive parents intended it that way or not.

Meanwhile, the family confectionary empire would eventually end up in serious trouble as the one thing that united it--family--soon became the biggest thing that divided the business.

I cannot say that I enjoyed this book, though it was an interesting insight into a little piece of Australian history and to a brand that is so very well known to me. It is also an insight into the lives and experiences of the Baby Boomer generation who found themselves adopted into wealthy households. While it wasn't for me, I do believe that this one was a well researched biography that told the story it intended to and that there are many readers out there who will find it fascinating.