Review: The Haven by Simon Lelic 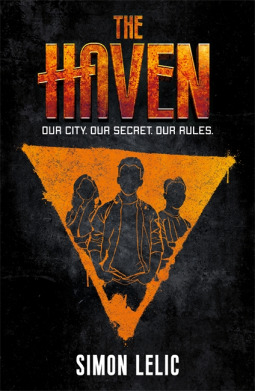 The streets of London are tough, but under the ground there is a secret organisation made up of kids, who help other kids who would otherwise be in danger. The secret organisation is called The Haven and they fight for justice. When eleven year old Ollie finds himself in grave danger after the murder of his guardian, the Haven is quick to take him in. Here Ollie finds himself on an adrenaline fuelled adventure, one that is as unpredictable as it is frightening. But it might just prove who Ollie has the potential to read.

This was an enjoyable read, one that works equally well for the middle grade market as it does for the YA market. Lelic's storytelling is fast and furious, yet sympathetic enough that I found myself cheering for Ollie as he tried to make sense of his new world, and do the right thing by the other kids. In some ways this one reminded me of John Marden's Tomorrow When the War Began. Ollie is an appealing character and readers will warm to him immediately.

Fans of Dickens' Oliver Twist should see some interesting parallels.

Thank you to Dymocks Gold Booklover Rewards and Hachette Australia for my copy of The Haven.
Simon Lelic The Haven