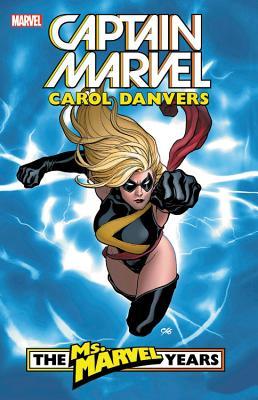 Before she was Captain Marvel, Carol Danvers was Ms Marvel, a superhero who was determined to be the best of the best. Carol Danvers--The Ms Marvel Years features Volumes 1-17 of the comic, along with a couple of specials. Originally published in 2006-2007 a number of the comics cover Ms Marvel's role in the Civil War event.

Just a little bit different from the recent Captain Marvel movie, this selection of comics is a little bit cynical and occasionally sexist (seriously, did we really need to see her undies from that angle on page two of Giant Size Ms Marvel?) On on the other hand, it is kind of amusing to see a superhero hiring a consultant because she thinks it will be a good PR move. (And what a disaster that turns out to be.) I wasn't really a fan of the Civil War storyline, but I get the historical context. However, what really makes this one shine is Ms Marvel's friendship with young Anya--the two make an unusual but great team. There is also action aplenty as Ms Marvel battles many enemies--including a nasty version of herself from another dimension!

Fans of the character will probably love the nostalgia trip and historical context of these comics.