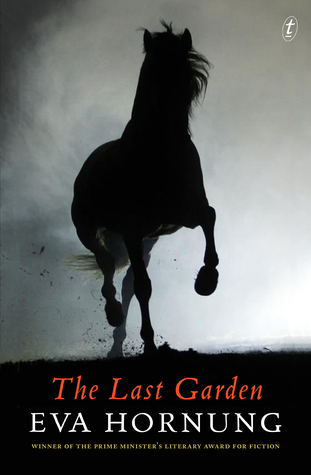 Intriguing, awful, well written, brutal ... The Last Garden is a novel that is as readable as it is irritating and left me with some very mixed and unresolved feelings.

The main characters live in a world that is very much like ours, yet something is a bit different. Something is a bit off. They live in a German settlement in a part of Australia sometime during the early 20th century, but when exactly is difficult to tell. And it's certainly not much like the German settlements that we learned of in our Australian Studies classes at school. Or the ones in Colin Thiele books. Even the language is slightly different. There is something darker about this place--the author does a commendable job of creating a world that is as rich as it is dark. I'd say gothic and maybe I'd nail it, but the word also brings to mind a lot of pop novels from the 1970s and this book is nothing like any of them.

Fifteen-year-old Benedict returns home from boarding school to discover that his father has shot his mother and then killed himself. And then comes the first annoying thing about this book--we see Benedict as he walks the long trek home from the railway station. Then the story flips straight to the funeral. And then the author flips on us again, creating a realistic depiction of a child who is on the verge of becoming a man experiencing a grief so profound that he cannot leave the family farm, yet he cannot stay inside the house where it all happened. And so, he goes to live in a barn with the horses and while he grieves he builds a strong, and perhaps even spiritual relationship with those horses. Meanwhile, the the local Pastor must convince him to rejoin the outside world, but this is something that Benedict can only do if and when he is ready.

This one is quite profound for its complex and in depth depiction of grief. However, that world is so well, and so cleverly depicted that it comes at the expense of taking the reader properly on the journey with the characters. What is not said and depicted is equally as important as what is said and depicted, or maybe that was the point. And then of course there are the references to the last garden. If the Garden of Eden was the first, then perhaps this is the last and therefore, Eden's opposite.

Or maybe I'm a dumbhead who completely missed the point of this novel.

In any case, someone published it, it's won a shitload of awards and there are critics with far more credentials than me who are raving about it.