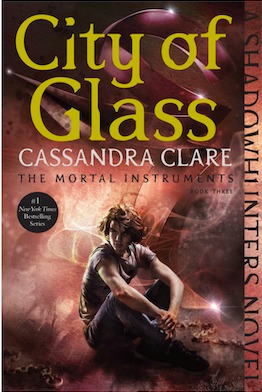 Having just finished City of Glass, I'm now fairly bloody certain that this series was originally intended to be a trilogy. Packed full of action, the novel works steadily toward a confrontation, one that the likes of the Shadowhunters have never seen before, and will change their world forever.

In City of Glass, the major characters find themselves in Idris, the traditional home of the Shadowhunters. Some are there by choice, others by accident and not everyone is welcome. (Simon, it seems, is always doomed to experience the worst of things.) A day of war--and reckoning--with Valentine is drawing near and there are some surprising twists, turns and a big reveal that will change Jace and Clary's lives forever ... provided that they live long enough.

This was a ripper of a story that builds on the previous two and works toward an action packed and satisfying climax. Surprising truths are revealed as well as new characters--it seems that Valentine has another son. The final chapters have the most impact, and there are some surprising twists and turns, though I have to admit, the return of one key character was a bit disappointing and the news she brought was revealed in a less than dramatic fashion. Otherwise though, this one is the perfect read for anyone who loves urban fantasy that features young characters and an emotionally charged storyline.