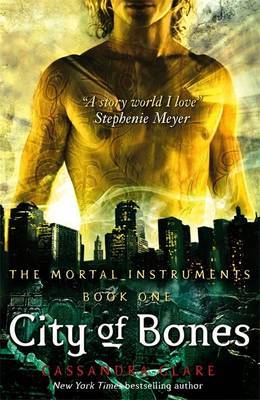 Eleven years after I started reading The Mortal Instruments, I've gone back to re-read the series from the beginning. Finding the first book wasn't exactly hard--my first Australian edition of City of Bones (the one that comes complete with a note in the back to say that the sequel will be released in 2008,) has been sitting proudly on my bookshelf for years, beside novels by other authors who first became popular during the era, which was post-Harry Potter, but just prior to the advent of the Kindle. Vampire Academy and Twilight were two notable series to come out of this time. Incredibly, as some may have seen from my review last week, The Mortal Instruments universe is still going strong, though it has been rebranded Shadowhunters, to fit the fact that it now incorporates three different series set in different eras that are linked by common themes. There has also been a Mortal Instruments feature film, and a Shadowhunters television series which is now in its third season on Netflix. Of course, I knew nothing of what the series would become back when I read the first book. What's probably more surprising is that I never really took that much notice of the many sequels and spin-offs as they were released, given how popular the series has become. Too much else going on, I guess.

Anyway, I've gone back to the start, with the intention of reading all of the books. And this time around, I'm slightly gobsmacked by just how addictive this series is. Clare certainly knows how to write a page-turner. In the first novel, we are introduced to Clary, a seemingly ordinary teenage girl living in New York who, though a series of unfortunate events discovers that everything she has known for the past fifteen years is a lie. She is actually a Shadowhunter--a human with angel's blood. A chance encounter with a Shadowhunter named Jace followed by the mysterious disappearance of her mother (a Shadowhunter who has been in hiding for many years,) forces Clary to play an active part in an ancient war between the Shadowhunters and various demons ... and against her father who is the most dangerous Shadowhunter of all ...

Some tropes exist for a reason (ie an ordinary kid finding out that they have extraordinary talents,) and most of that has to do with the fact that when they are executed well, they're bloody entertaining. Clare's talent comes from taking established tropes and myths and shaping them into a page turner featuring young characters that you can cheer for. There is a VC Andrews style twist toward the end, but the author handles it in a tasteful fashion--in fact, this is something that the ghostwriter for VC Andrews may want to take note of. Probably the best thing about this series is that although it features teenage characters, it's not strictly for teenagers, which is probably why my local bookstore places the books in the fantasy section, rather than the YA section.

Overall, this was an enjoyable read and I'm looking forward to reading the second book in the series in the near future. Recommended.