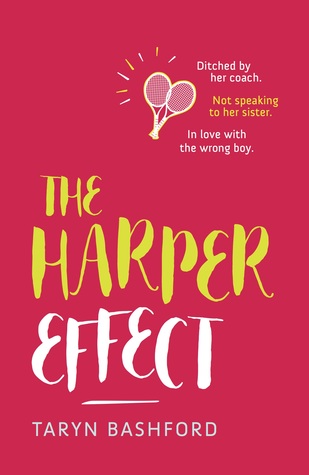 The elite world of competitive tennis is the setting for this fun teenage coming-of-age novel. Harper Hunter is a sixteen-year-old competitive tennis player who may have a bright future ahead of her--if only she could stop getting knocked out of the first round at major events. To make matters worse, she's just been dumped by her coach and she's falling in love with Jacob--the boy who she has known forever and who is in the middle of a messy break up with Harper's beloved older sister Aria. Then along comes a new and interesting coach, a moody doubles partner and suddenly, it seems that Harper's world is spinning in a new and different direction.

This was an interesting novel about competitive sports, growing up and learning how to move forward. There are a number of plots that thread together, but perhaps the most interesting--and controversial--was the changes in the relationship between Harper, Aria and Jacob. All three are hopelessly conflicted, wanting success in their chosen fields, but clinging to one another in unhealthy ways, because they don't want to change. I think the author tells this part of the story in a way that is both realistic and compelling. I liked that all of the characters were portrayed as humans who made mistakes, occasionally suffered for them but eventually came out on top in their own way. And Harper's future is, of course, tied to tennis, so one of the other plots where she learns and grows with her doubles partner Colt, is also quite compelling. Colt is certainly facing his own demons and I think the story was handled quite realistically. And, of course, there is more than a touch of romance threaded throughout that particular plot.

I'm not much of a sportsperson, so I was surprised by how much I enjoyed the tennis scenes, as well as the descriptions of a number of elite sporting venues from across the globe.

Overall, this is an enjoyable coming-of-age novel with characters who, while they are not perfect, are a lot of fun to read about.

This book was read as part of the Aussie Author Challenge 2018.
Taryn Bashford The Harper Effect