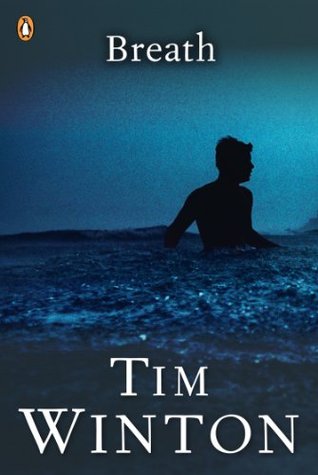 I cannot quite remember why I didn't buy or read a copy of Breath when it was released in 2008, despite the fact that I've been a Tim Winton fan since the late 90s, wrote a part of my honour thesis on Dirt Music, though I can recall that 2008 was a year of many great changes for me, so maybe it just slipped off my radar. I wouldn't read another Winton novel until Eyrie was released in 2013. (Speaking of, I never did review Eyrie on the blog ...) Anyway, I bought a paperback copy a few years back, and put it down after a few pages. Having just enjoyed That Eye, The Sky and knowing that Winton has another novel due out soon, I decided to give this book another go.

What I got was a slow moving but enjoyable coming-of-age novel that is spoiled somewhat by a depraved plot twist somewhere toward the end. And maybe my stupidity is showing right here, but I honestly think this coming-of-age story could have worked just as well, if not better, without it. Okay, I get that it actively demonstrates the link between fear and adrenaline, which is what drives the characters through their adventures as they take greater and greater risks in the surf, but it also pushes the boundaries of what I am comfortable with reading about, and what I am not. Over the years, Winton has taken me to so many different places and forced me to feel empathy for so many different people, but this twist left me with a huge question mark over my head. Either it is a really shitty thing to do to a reader, or I am not nearly as smart or as literate as I previously thought.

Anyway, most of the novel tells the story of Bruce Pike, a kid growing up in Western Australia in the 1970s who, along with his friend Loonie, is befriended by Sando, a semi-retired pro surfer who wants to mentor both boys. As the years go on, Bruce, or Pikelet as he becomes known, slowly begins to realise that although he is good at his sport, he'll never be quite as good as the other two, or willing to take the risks that Sando and Loonie do. This, along with a betrayal, leads the fifteen year old Pikelet to have an affair with Eva, Sando's bitter wife, and then, well, something happens that proves that this child is well out of his depth. Or that he's you know, a fish out of water. (Sorry.)

And, of course, Pikelet doesn't grow up to have a great life--it's as if the pain of living, and consequently, breathing is more painful than dying. It's a depressing thought.

Fans of Winton's early novels may be amused to know that Queenie Cookson makes an appearance as Pikelet's girlfriend.

The writing is good, the last part of the book unsettling.