December 17, 2017
Longtime readers and fans of this blog may recall that during 2012 I committed to reviewing what was then four books in the BSC Graphix series. For one reason or another, I never published a review of the fourth novel in the series, Claudia and Mean Janine. As a fifth book has just been released in the series (and as of December 2017 is sitting on my to-review pile,) I decided to re-read this one and publish a review. Ps I ramble on a bit in the first paragraph of this review so if you would rather just read a review of the book, it's probably best to skip to the second paragraph. 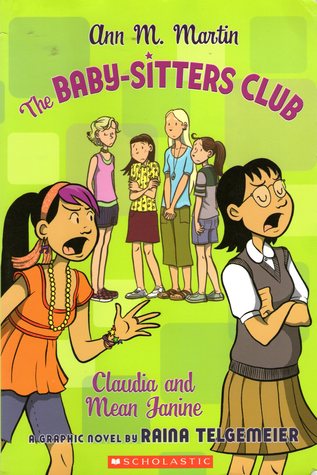 The BSC Graphix series was always going to be a little different from the books that inspired them. For one thing, technology has changed considerably since the early novels in the Baby-sitters Club series were published in 1986. And there is also no arguing that Claudia's second novel in the original series, Claudia and Mean Janine, which contains themes of sibling rivalry and illness, packs a far greater punch than Claudia and the Phantom Phone Calls, which was Claudia's first book in the series. To be honest, Claudia and Mean Janine has always been a firm favourite of mine. This is for two reasons. The first is that for one reason or another, copies of this one were very difficult to find in my part of the world when I was reading the series. My school library didn't have a copy, my local library didn't have a copy and neither did the local bookshop. Anyway, one day, my grandma decided to buy me a Baby-sitters Club book during a trip to Adelaide. She randomly picked one from the shelf and it was ... you guessed it, Claudia and Mean Janine! I still have my copy and it's the only one with the original green cover that I've ever seen, though I've both updated versions around the place from time to time.

The fourth BSC Graphix novel changes the timeline a little and opens with the final week of school. Claudia is not interested in studying, she's more interested in her art classes and the Baby-Sitters Club. This frustrates her parents and is looked down upon by her older sister, the studious and ultra intelligent Janine. The differences between the pair aren't helped by the fact that Janine's social skills aren't great. And while it seems that their parents might like Janine best, at least Claudia has Mimi, her kind and loving grandmother. But when Mimi has a stroke, Claudia feels as though her whole world is crashing down around her ...

This adaption is very well down. Telegemeier does a great job (perhaps even better than Ann M Martin in the original series,) of highlighting the differences between both sisters, but also showing them both as human. (I think the facial expressions in each frame do that quite well.) Each sister is jealous of the other and neither has a clue of how to communicate with the other.

There is also a b-storyline which shows the Baby-sitters forming a summer playgroup and introduces another beloved character to the series, Mallory Pike. In a surprising twist [spoiler alert] Mallory is asked to join the club at the end of this novel. There is no sign of Jesse yet, so I'm wondering if or when she is going to be incorporated into the series. (On that, if anyone at Scholastic is taking requests, I'd love a graphic version of Jessi's Secret Language. I think it would be a great educational tool.)

This is an enjoyable re-imagining of a classic series. Recommended.
BSC Graphix Raina Telgemeier