Review: The Bees by Laline Paull 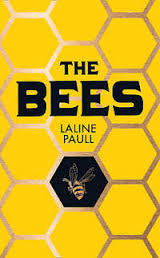 Laline Paul's debut The Bees is a cleverly imagined and executed thriller with a surprising setting and characters ... ones that may just be more like humans than we care to admit. Flora 717 has just hatched and discovered that she belongs to the lowest caste in her hive and has only narrowly escaped death for being too large, too ugly and too damn smart. To survive Flora must follow the rules.  Accept. Obey. Serve ...

I thoroughly enjoyed reading this one. The Bees is the first book that I have read that is from the perspective of well, a bee. The subject matter is well researched and much plays as a bit of a take on humanity--particularly on how survival of the fittest does not necessarily mean survival of those who are the strongest but, rather, those who are the most cunning. It was a bit gut wrenching watching a number of sacrifices (sacrifices: a euphemism for mass murder and, in one instance, genocide, while murder is generally referred to as The Kindness) and the blind loyalty with which the hive all followed their queen, even when it leads them to a deadly end. Flora's maternal longings were bittersweet, though the ending is fitting and properly explains Flora's place in the hive. (Flora is both a saviour and a threat.)

I found The Bees to be bit like Animal Farm, but with a more general commentary on human nature, rather than being politically motivated. I disagree with a number of comparisons to The Hunger Games and I am not sure that I would label this one as dystopia as it was in this review that appeared in The Guardian.

Recommended to anyone who wants to take a chance with a book with an unusual premise, though I suspect that this will not appeal to every reader.