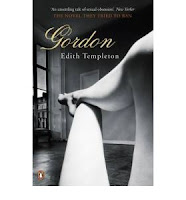 In the wake of Fifty Shades of Grey, it's unsurprising to see a flood of classic erotic titles finding their way back into print and placed on romance shelves inside bookstores. One such novel to enjoy a reprint is Edith Templeton's classic novel, Gordon. Once upon a time, this novel of a headstrong young woman who enters a horrific relationship with a brute was published under a pseudonym and eventually banned in England under the Obscene Publications Act. (Read more here.)  It's certainly not reading for children, or for the lighthearted. In 2003 the novel was rereleased, with the author named for the first time. This time around, Gordon has enjoyed a much quieter reprint and will most likely be ignored by the scores of women who all so obsessively devoured Fifty Shades of Grey and its sequels.

Far from light reading and with sex scenes that are as brief as they are disturbing, Gordon offers an interesting and believable psychological study into the main characters and their relationship. Dr Richard Gordon is a psychologist and all round brute. He uses his knowledge of psychology to seek out and trap Louisa, a young divorcee living in post-war London. Within an hour, Gordon has conquered Louisa on a stone bench and spends the rest of their relationship trying to break her psychologically and forcing her to become totally dependent on him. There is no warmth or intimacy in their relationship, their unions are about sex (or sex as Gordon desires it,) and control. In fact, Louisa cannot even bring herself to think of Gordon by his first name.

Gordon charms and sometimes forces the young woman to admit her weaknesses as a means of taking control. Lousia is also forced to tell the stories of her past relationships, while Gordon analyses her behaviour and actions. Of particular interest to me was the story of her crush on Derek O'Teague, a weak and pathetic man who managed to fool Louisa into believing that he was someone important--it was only when the crush faded that Louisa realised how stupid and unimportant the man was. (To this, I can relate.) I also found myself fascinated with the hold that Gordon had on Louisa and how he sought to keep it, followed by the revelation that to many women, the brutal Gordon was a weak man who was unable to perform sexually. In Louisa, he has found the perfect woman to bully and someone who considers him to be sexually powerful. In Gordon, Louisa has found a man who she can hide behind. She no longer has to think for herself or take responsibility for her sexuality. Of course, the relationship eventually self-destructs, but the real shock lies within what the future holds for both sides.

Gordon is an uncomfortable, unsettling and sometimes unputdownable exploration of human sexuality. As upsetting as it is fascinating and without a happily-ever-after ending, this is a book for anyone who wants to learn more about sexual politics.
Edith Templton Gordon