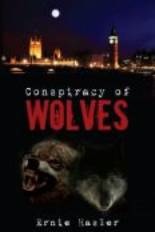 Imagine this: Three hundred people rule the world by virtue of a pact that dates all the way back to the eighteen century. These three literally control everything--politics, religion, the military. And only one man can stand up to them.

That is the premise of Conspiracy of Wolves, the second novel by indie author Ernie Hasler. This thriller tells the story of Douglas, a young man who knows the truth about the group of three hundred and is determined to stand up to them. Set in the United Kingdom in 1997, the book plays out against the backdrop of actual political events--such as the election of Tony Blair and the New Labour government. In many ways, the story reads like a morality tale--the narrative is reminiscent of a member of the older generation educating the younger about the wrongs of the past and the need to be like Douglas and his wife, Kelly by many sacrifices in order to do what is right. There were a couple of problems with the book--the dialogue, particularly that which was spoken by Kelly, felt a little unrealistic, but this did not take anything away from the flow and pace of the story. Also, I'm not sure if this was deliberate or not (perhaps a means of setting up an alternate universe?), but I noticed that Douglas took a tour of Westminster Abbey on September 6 1997, which is the date and location of the funeral of Princess Diana. All in all, Conspiracy of Wolves rides along at a fast past toward a satisfying conclusion. Check out the eerie trailer here: