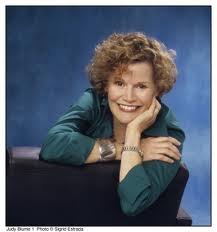 This next post is devoted to one of my all time favourite authors of books for children and young adults, Judy Blume. Like many kids of my generation, I more or less grew up reading Judy Blume. When I was nine, I giggled at Fudge and felt sorry for his poor, suffering older brother Peter. When I was eleven, I understood only too well the world of female bullying that was so accurately and honestly depicted in Blubber. When I was thirteen, I read Then Again Maybe I Won't from cover to cover several times and took comfort in the fact that boys had to go through puberty as well. When I was fifteen Forever offered me a far more honest and accurate account of teenage relationships than what sex education classes or the pages of Dolly magazine ever could. And that's not even mentioning the personal impact many of her other wonderful novels had on me--Iggy's House, Starring Sally J. Freeman as Herself, Are You There God? It's Me Margaret, It's Not the End of the World, Deenie, Here's to You Rachael Robinson and my personal favourite, Tiger Eyes. My mother encouraged me to read as many of these books as possible, as did Cathy, the children's librarian at my local library.

The magic of Judy Blume's novels lies in the honest way the stories are told. Her characters are ordinary kids just trying to navigate their way through life. For example, I've never read a book that so honestly and simply depicted female bullying as Blubber. As a child, I understood perfectly how the main character, Jill, felt first when she witnessed a classmate being bullied and then, the consequences that she suffered after speaking up--I had similar experiences while I was at primary school.

Blume has also written three novels for adults that I have yet to read, Wifey, Smart Women and Summer Sisters.

Over the next few weeks, among other posts and projects, I plan to re-read and review some of my favourite Judy Blume novels as well as reading her adult novels for the first time. I hope you'll join me as I give these books the reading and review that they deserve. (Along with a few personal anecdotes, naturally.)
Judy Blume the Judy Blume Files