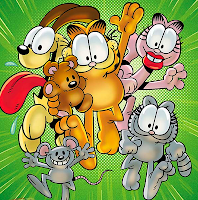 Before I start this next post, it's only fair that I should thank my brother for supplying the source material, which I probably never would have found if left to my own devices. So thanks, Damien. It seems that my favourite comic, Garfield, has now joined the ranks of Peanuts and is getting the KaBOOM! comics treatment. This is to be a monthly comic series, in which the lazy lasagne eating tabby, takes a starring role with his pals Odie, Nermal, Arlene and Squeak. And the poor, long-suffering Jon Arbuckle is along for the ride as well.

I rather enjoyed the comic, which is fairly short and contains two stories. In Collectors Classic, Nermal discovers a rare first edition comic. (There are some very awesome and very clever jokes about first edition comics in this one.) In Big Mouse Meal a friend of Squeak tries to convince Garfield to eat him, with no success.

Given that the comic book is aimed at kids its unsurprising that the humour and characters are in keeping with many of the other Garfield related merchandise that is aimed at kids--children's books and the educational Professor Garfield comics. In this series, Nermal lives at Jon's house and loves comic books (as yet, there is no Willard around to steal them,) Garfield and Squeak are pals, and the reader is treated to Odie's thought bubbles. (His thoughts consist of, "Arf. Arf. Arf. Arf.") In a nod to the original series, there is a reference to Garfield trying to mail Nermal back to Abu Dhabi.

Written by Mark Evenier (who also wrote for the Garfield and Friends television series,) this is a solid entry into a long established franchise that will no doubt appeal to kids of all ages and diehard Garfield fans.

Postscript. About an hour after I published this article, this awesome interview with Jim Davis about the new comic format went live on CBR. Check it out here.
Garfield KaBOOM