The Judy Blume Files #1. Are You There God? It's Me Margaret 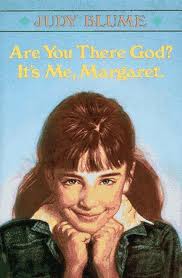 About six months or so ago, a regular customer at my workplace and I got talking about Judy Blume. He  confessed that as a preteen one of his favourite novels was Are You There God? It's Me Margaret and that he had been somewhat fascinated by reading an account of puberty from the perspective of a girl. Unsurprisingly, he laughed quite a bit when I told him that when I was thirteen one of my favourite novels was Then Again, Maybe I Wont, another Judy Blume novel which is an account of puberty through the eyes of a boy. I wonder if this was, perhaps, deliberate on behalf of the author. Or if we both just simply have a morbid curiosity about the other gender. (I'm leaning toward the former.) Speculation aside, Are You There God? It's Me Margaret tells the story of a girl, eleven, going on twelve, who wants desperately to grow up (or at least wear a bra and get her first period,) be accepted by her peers and work out what her religious beliefs and affiliations are. Which is all much easier said than done.

The novel opens with eleven-year-old Margaret moving from New York to New Jersey. The purposes of this move, it would seem is to get Margaret away from her domineering and very Jewish paternal grandmother. Margaret has grown up in a multi-faith family, her mother is Christian and her father Jewish. Her parents have opted not to celebrate religious holidays or force either faith on their daughter. In New York, this was not a problem. In New Jersey, however, it seems that everyone Margaret knows has one kind of religious affiliation or another. She decides to do a study on religion for her year long project at school, so that she can decide which faith she belongs to. Meanwhile, she often prays to God, beginning her prayers with Are You There God? It's Me Margaret, suggesting that she is doubtful about the existence of God at all, or at the least, who or what God may be. Her prayers centre mainly around requests for things that she thinks will help her fit in with her peers.

Puberty is a constant theme throughout the book. Margaret desperately wants to wear a bra (wearing a bra means that she will be included in a secret girls only club run by her friend Nancy,) and to get her first period. Two of the four girls in her group have already began menstruating and Margaret does not want to be left behind. She is also jealous of another girl in her class, Laura, who already has a large bust. She readily believes the nasty stories that Nancy tells her about Laura. However, Margaret soon begins to realise that Nancy may not be entirely honest when she first discovers that her friend has lied about getting her first period and then when she teases Laura about the mean things that Nancy has said. The book also deals with the clumsy way that puberty is sometimes talked about at school--the girls are made to watch a film about menstruation that has been sponsored by a manufacturer of feminine hygiene products that appears to be little more than a long commercial. It's also amusing to note how much technology has changed since 1970 when the book was published--there is a section where Margaret practices attaching a sanitary pad to a belt (no adhesive, or ultra thin pads back then,) and tampons are deemed unsuitable for anyone in their teens. (No mini tampons, or warnings about Toxic Shock Syndrome.) Later editions of the book have been updated.

Along with the discovery that her friend Nancy is a liar, Margaret decides that she does not want to belong to any religion. She decides that she will never speak to God again. However, after she finishes the school year (having not completed her project on religion,) she thanks God when she gets her first period. The prayer is short and ends mid-sentence, suggesting that Margaret's thoughts on religion remain confused. If she continues to have a relationship with or belief in God, it will be without any kind of organised religion.

Ethan said…
Great review! You may be interested in reading The Lifeboat by Charlotte Rogan. The story follows a young woman as she attempts to survive after a shipwreck. It also details a murder trial and provides some interesting insights into the world during the early 20th century. I am currently hosting a giveaway of the novel, so follow the link below if you are interested. Thanks for your insightful reviews.
-Ethan
http://e135-abookaweek.blogspot.com/2012/05/lifeboat-by-charlotte-rogan.html
23 May 2012 at 01:14