Review: Bridgerton: The Duke & I by Julia Quinn 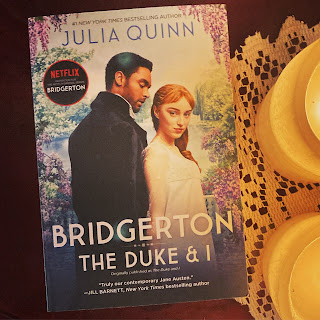 Mass market Regency Romance isn't usually my thing, so what am I doing reading The Duke & I? Is it because I secretly became addicted to the recent Bridgerton Netflix series? Did I want some chill out time and a light and frothy read? Do I have secret plans to start writing mass market romance?

I read The Duke & I because I lost a bet.

I liked it. The Duke & I is a fun frothy read, set in Regency London. The Bridgerton's are a large, wealthy family and part of the ton, London's rich and fashionable set (for want of a better description.) The eldest Bridgerton girl, Daphne is amiable and well-liked, but no one really desires her, apart from the odd unsuitable match. And this is bad news, because at twenty-two, Daphne is quite keen on marrying and having a large family much like her own. Enter Simon, a Duke, who just happens to be an old friend of Daphne's oldest brother. Best known for the massive chip on his shoulder, Simon never wants to marry and never wants children. Which is probably a good thing, seeing as Daphne's oldest brother wants to keep the two as far away as possible from one another. But the pair have other ideas. And, not those ideas. They enter into a fake courtship, one that Simon hopes will keep him from being pestered by the mother's of eligible young ladies, and one that Daphne hopes will make other eligible bachelors take notice of her. Only well, this is a romance novels. And we all know what happens in romance novels that involve fake relationships ...

This was a fun read, one that never takes itself too seriously as the main characters navigate their way through a romance that changes the both of them, forever, before eventually finding the path for true love. My favourite scenes were the ones involving well, a shotgun, though they did prove just how much of a twit Simon was. But this is fiction, and as a comic twist, it serves the story well.

The prose is and storytelling is basically what I would have expected from a book like this--Mass Market, though not necessarily trashy--though I did get annoyed at some of the Americanisms that crept into the narrative. (I'm not sure that the term "Ambitious Mama's" would have been used quite so frequently in Regency London.) Overall, the whole thing is a bit of fun and delivers on everything it promises on the front cover.