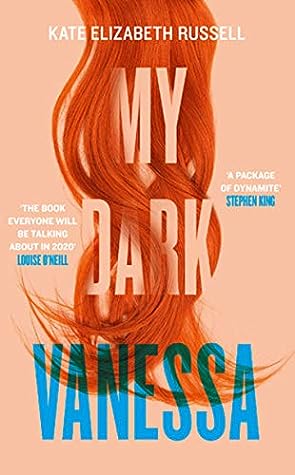 Debut author Kate Elizabeth Russell offers a compelling portrayal of a young woman who is targeted and groomed by a man who should have known better, and let down by the people who her parents trusted to look after her.

When Vanessa Wye was fifteen she fell in love with her English teacher at boarding school. Years later, a number of allegations are made against the teacher by some of his former students. Vanessa is horrified. What happened to her was love, not abuse ... wasn't it? Through flashbacks the author shows the terrifying reality, of a young woman who is selected and betrayed in the worst possible way, and the psychological harm that follows. My Dark Vanessa is not an easy book to read, but my goodness it offers readers a chance to understand how others can be betrayed and why they don't just say no. It also shows how these situations can be compounded, by adults who choose to look the other way for the sake of their own professional reputations--in this case an elite boarding school whose lazy investigation is all about salvaging the school's reputation rather than helping someone who is being abused.

As I stated at the beginning of the review, the story is compelling. At times it was tough to read, in particular the scenes that described the abuse, showing just how innocent Vanessa was, and just how depraved Strane, her forty-two year old abuser was at heart. My heart broke for the older Vanessa as she slowly began to come to terms with what had happened to her, after being in denial for so many years.

This is not an easy read, and is most definitely not a book that should be picked up by anyone looking for entertainment, or a book that depicts a bit of a scandal. It is a book written to help better understand what victims go through.
Kate Elizabeth Russell My Dark Vanessa