Review: The World of Tomorrow by Brendan Mathews 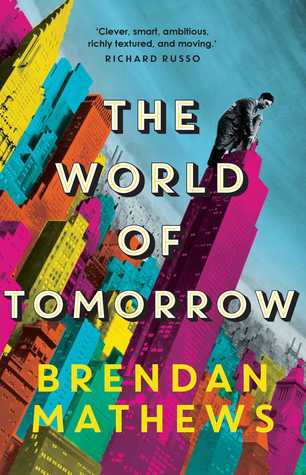 A fascinating setting and a ripping (and often hilarious,) plot make The World of Tomorrow a winning read. In 1939, the World Fair opened in New York. For America, at least, it was a time of hope, optimism and unity with other nations. (Of course, as history cruelly reminds us, what lay in the immediate future was the Second World War.) In the middle of all this is Francis Dempsey an escapee from an Irish Prison, who after a misadventure involving an accidental explosion is now wanted by the IRA. In tow is his younger brother Michael, an escaped trainee priest, who had his eardrums blown to bits in the explosion, but who can now see and speak with none other than William Yeats. Francis also has a suitcase full of cash that he has stolen from the IRA and he's using this to fund his and Michael's escape to America, where they pose as a pair of wealthy Scotsmen and live it up in high society as they search for their older brother Martin who is a poor but talented jazz musician. Amongst this are other characters who do much to broaden out the story Cronin an ex IRA man who has found a better life as a farmer, but finds himself obligated to do one last job, and Lily, a photographer from Prague, whose tragic story reminds us of the atrocities that were already happening in Europe and how ignorant, or perhaps complacent, the rest of the world were to these events. Inevitably, the characters end up at the World Fair, in a storyline that is one, utterly entertaining and two, best left for the reader to discover. (I'll just say that it might have something to do with a royal visit.)

Although long (551 pages,) and packed with characters and various tangents, this one makes for entertaining reading. I found the exploits of Francis and his alter ego Angus to be quite amusing (and I like that he remained a gentleman to the vulnerable Anisette,) and I loved the many musical references. The author does not shy away from the fact that there was a lot of inequality in the time and place where the story is set, and the story is better for it. The plot itself is a very clever play on real events.

Thank you to Simon and Schuster Australia for my review copy.
Brendan Mathews The World of Tomorrow