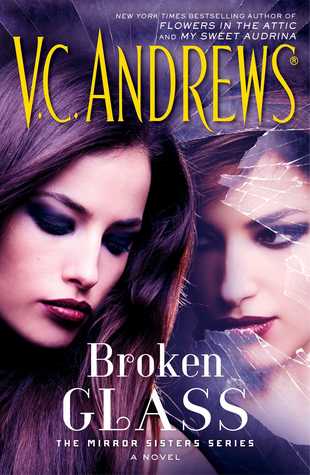 An evil twin, a psychotic mother, a fraught family relationship and a shocking abduction are the themes of Broken Glass, the twisted second instalment in the Mirror Sisters trilogy. And it all goes downhill from there, really. The novel opens from the perspective of the supposedly evil twin, Haylee Blossom Fitzgerald. Haylee has just arranged for her identical twin sister Kaylee to be abducted by a crazy redneck who has marriage--and a honeymoon in a basement--on his mind. Never mind the obvious hell that her sister is about to endure, Haylee is looking forward to the prospect of being an only child. Maybe now her domineering mother will allow her to be her own person, instead of parading her and Kaylee around like a pair of purebred puppies. And no longer does Haylee have to be constantly good like her well-behaved sister.

Meanwhile, Kaylee is coming to terms with one, a massive betrayal from her sister and two, the fact that she's basically trapped inside a rape camp and needs to outwit her captor, Anthony Cabot whose resemblance to Norman Bates so close that he does indeed keep his dead mother in the house. Back at home, Mommy dearest has suffered a breakdown, the girls father is able to assert himself for the first time and everyone is too dumb to realise that Haylee has set the whole thing up. The ending is predictable enough, and the writing itself is quite trashy.

I went into this one with fairly low expectations and had them confirmed with every twist. At least this time around there was no glorification of rape or sexual abuse, which has been an all too constant theme of many of the V.C. Andrews novels that have been penned by ghostwriter Andrew Neiderman. There was also far less repetition than the first novel. It staggers belief that Haylee could keep up her deception as long as she did, especially when it was obvious that the police, and Mrs Lofter, the no nonsense nurse brought in to care for the twins mother, was suspicious. Some parts of the story, such as Haylee's relationship with Ryan felt totally superfluous to the plot. As I said in the previous paragraph, the writing is trashy. This is all too common with the ghostwriter novels, of which there are now more than seventy titles. (It's debatable which titles were penned by Neiderman and which were penned by V.C. Andrews herself in the year or so following V.C. Andrews death.)

One of the most twisted parts of this novel comes not from the story itself, but for its possible similarities to the the disappearance of Tara Calico. It is believed that Calico was abducted and held against her will. Several months after Calico disappeared, a photograph of the young woman surfaced. In the picture, she was bound and gagged--and beside her was a copy of her favourite book, which just happened to be My Sweet Audrina by V.C. Andrews.

Not really for me, but fans of the series will probably enjoy this instalment.