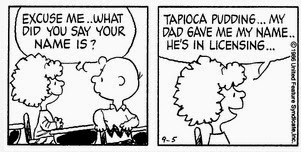 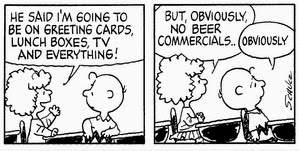 This weeks selection for Friday Funnies comes yet again from Schultz brilliant Peanuts Comic Strip. One of the least memorable characters with the most memorable name (and when you consider some of the unusual names that were featured in the last twenty-five years of the strip i.e. Truffles, Peppermint Patty and Molly Volley, that is no easy feat,) is Tapioca Pudding. Tapioca Pudding made her Peanuts debut in 1986 and was a student in the same class as Charlie Brown and Linus Van Pelt. She appeared to be quite taken with her blonde hair and her father's job which was in licensing [sic] and hoped to one day have a range of lunch boxes and t-shirts with her picture on it.

Just as Schulz often used his comic as a vehicle to discuss everything from unrequited love to wishing his daughter Amy happy birthday, the point of Tapioca Pudding's existence seems to be for Schulz to laugh at, and point out the ridiculousness of licenced merchandise. During the 1980s, it was common for children's cartoons to be used as a vehicle to push a large a range of associated merchandise--for example the Care Bears, Rainbow Bright and He-Man were all Saturday morning cartoons that came with an extensive, not to mention expensive range of licenced merchandise. The cartoons themselves were quite cheaply made and are probably considered unremarkable to anyone outside of the generation who grew up with them. Even the naming of this particular character--Tapioca Pudding--would appear to be a send up of Strawberry Shortcake. Of course, such a protest from Schulz seems highly hypocritical, considering the huge range of Peanuts merchandise that has been produced both before and after Tapioca Pudding's Peanuts debut. (Click here if you don't believe me.) And if you consider that one of the early Charlie Brown TV specials damned the commericalisation of Christmas, but was sponsored by Coca-cola. (Click here.)

The difference is, of course, that Schulz put his heart and soul into his work and always produced a high quality comic. The merchandising itself was handled by United Feature Syndicate. (Though Schulz would later get annoyed that the Syndicate also put a lot of effort into marketing Garfield merchandise, the only comic strip that has ever come close to rivalling the popularity of Peanuts, see Schulz and Peanuts by David Michaelis for more information.) The comic came first, the money made from merchanding was simply a reward for all his hard work. The fact that others could bypass this stage probably angered Schulz quite a bit. And hence, one of the most useless characters in the strip, Tapioca Pudding. 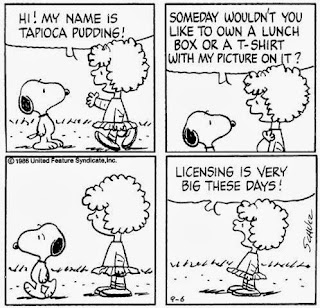