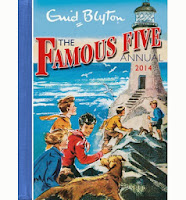 I have to admit, a very childlike part of me became very, very excited (in a clean way, folks, don't get ideas,) when I was inside my local Big W and saw that they had Famous Five Annuals for sale. It's been many, many years since I bought at annual of any kind, and I don't think Famous Five ones were actually around during the course of my childhood, but I was always a bit of a fan of the series (in fact, the first full length novel I ever read alone was Five on a Treasure Island,) and annuals generally, so I couldn't resist snapping this one up. It looks as though this one has been produced to cash in on, sorry, celebrate, the recent seventieth anniversary of the series.

Fortunately, the annual reads less like a kids book and more like a holy grail for nostalgic, childless adults (i.e. me). There are short stories, comics, a history of the Famous Five (and yes they do pay homage to Five Go Mad in Dorset, the Famous Five spoof produced by the Comic Strip, that went on to become almost as popular as the series itself,) and there are profiles of all five lead characters, though naturally Dick and Anne (arguably the most boring of the five,) have their profiles poked somewhere near the back. This one is a fun, nostalgic read and it wont set you back all that much money, either.
Enid Blyton The Famous Five