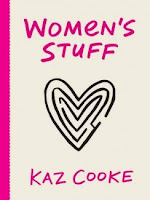 I would like to start this book review by expressing my gratitude for two things. The first is that the advice in this book is based on one, research and two, common bloody sense, the two things that are so often lacking in books such as this. The second thing I am grateful for is that the book is written by Kaz Cooke, who I have been a massive fan of since I was about sixteen and someone came to my high school and gave a talk on body image and recommended her book Real Gorgeous, which I subsequently read from cover to cover.

The real value of Women's Stuff, a 700+ page encyclopedia, is the honesty and lack of preaching as the author talks about every aspect of womanhood. Within the pages you'll find advice on body image and confidence, personal grooming, periods, pregnancy, dating and a host of other things that most females will encounter at one time or another. I love the common sense and the humourous advice on how to keep things in perspective, for example in the body image section Cooke states:

Your body shape isn't based on your star sign or any other ancient made-up system, or on the latest theory from someone trying to sell a new diet book. That's all piffle.

Piffle. I love it. And I love the fact that her book isn't trying to sell me an idealised version of womanhood, that I should aspire to be a supermodel with 2.5 children, fake nails, a rich and handsome of a husband who can one, cook and two, make me climax within ten seconds whilst having some kind of weird tantric sex swinging from the lampshade and having some kind of high flying career being the CEO of a socially and ethically responsible company. And you know, winning the X-factor or something. Because frankly, I don't think I make the cut and I'm not sure that I want to.

Women's Stuff is about accepting yourself as you are, and making decisions based on common sense, rather than blindly listening to the media or stereotypes. (I smiled quite a bit with her statistics out of 4000 women surveyed, less than five percent removes her pubic hair--a very different story to what we females are constantly sold in the mass media. Granted, of course, that those 4000 women came from a very diverse range of ages.) There are numerous letters from women who talk about their real experiences, which shows that personal experience and opinion can differ quite radically. Or as the blurb puts it, there is no fibs, faff or fakery.

Recommended reading for all women.

Unknown said…
Great review! Put it on my wishlist immediately after reading this. Seems like a must read for all women!
16 October 2012 at 10:14