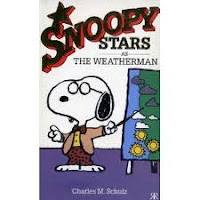 Another awesome find down at my local vintage store was a set of four digest-sized Peanuts comics. Released in the late 1980s/early 1990s, these awesome comic books formed part of the Snoopy Stars As series. Each book was basically the same, featuring those comics where Snoopy imagined himself to be the Flying Ace, Joe Cool, etc. More interesting were some of the other guises this lovable beagle has pulled over the years, including the Tree Vulture, the World Famous Surgeon and where he takes on the role of guard dog at Peppermint Patty's house. (Later incorporated into an episode of the Charlie Brown and Snoopy show.) Lots of fun for a boring Sunday afternoon.
Snoopy