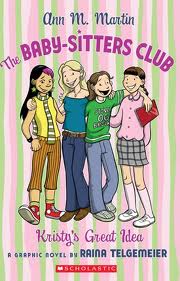 Twenty years after the first BSC book, Kristy's Great Idea was released, Scholastic decided to go back and do it all again, this time in graphic novel format. And you know what? I love it. It's basically the same story of how the Babysitters Club formed. The backstory for each character is the same (Kristy is struggling to accept her mother's new boyfriend, Claudia is jealous of her smart older sister, Mary-Anne's father is overprotective and Stacey wants to keep her illness a secret.) And, of course, Stoneybrook still has that wholesome 1950s sensibility. As for the graphic format, it's interesting to see how artist Raina Telgemeier depicted each of the characters. Kristy and Stacey each look roughly how I imagined them, Mary-Anne comes across a little dorkier and, sorry, but Claudia looks like a forty-year-old hooker in places. In parts, the novel reminded me a little of Lynne Johnson's brilliant For Better or For Worse comic strip. Over all, a fun nostalgia trip for anyone who loves comics and has good memories of the Babysitters Club.
Ann M. Martin BSC Graphix Raina Telgemeier The Baby-sitters Club