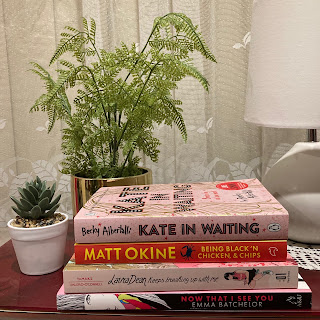 Becky Albertalli has written a number of fun, playful YA bestsellers about first relationships and kids trying to make their way in the world. Take for example Simon Vs the Homo Sapien's Agenda which is about a spitrited young man and his coming out and The Upside of Unrequited which is about a twin who first suffers a huge case of jealousy when her sister falls in love, and then she finds herself falling for a guy that neither her twin nor her friends really understand or approve of. Both novels feature some wonderful raw moments. There is also a lot of fun to be had in Leah on the Offbeat and various novels that Albertalli has coauthored with some big names in YA.

Kate in Waiting does not live up to the high standards set by her earlier work.

This one feels very much like a by-the-numbers work of fiction, with limited world building and a love interest that lacks depth. The set up is this. Kate has been best friends with Anderson for a long time. They often share crushes, on account of the fact that Kate is straight and Anderson is gay. Their latest crush is Matt, a guy from their theatre camp. When they return to high school for their senior year a surprise is in store--Matt has enrolled at school and is in their drama class. He wants to be friends but only one of them can date Matt and it might just put a strain on their friendship ...

This novel is not told as well as it could be. Matt never feels like a fully formed character, and everyone else in Kate and Addison's group of friends feels like they are there to make up a diversity checklist. Don't get me wrong, diversity in YA is excellent, but for it to work, it needs to flow very naturally. What is also bothersome is the way that the characters judge everyone else at their school and the endless usage of the words fuck boy, and f-boy, which I felt was unnecessary. The whole thing is intended as a fun novel about theatre obsessed kids, but it comes across as very forced and lacking in depth.