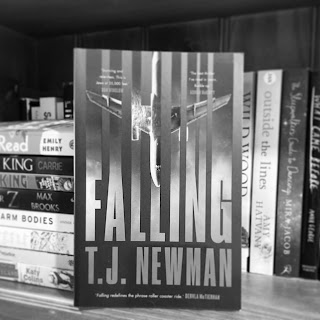 The most surprising thing about T.J. Newman's debut Falling is that it is a novel at all. I don't mean that in a negative sense at all, it is just that this one is so atmospheric and action packed, leaves the reader with such an urgency to know what will happen next, that somehow it feels more like a film. Or to be more specific, a blockbuster film, the kind that, pre-Covid would have me lining up with the masses at the Marion Megaplex on a Friday night, armed with popcorn and a coke. And afterward, no doubt my companions and I would make our way to Cafe de Vilis, because everyone would want to talk about the film, and no one would be in the right frame of mind to go home and sleep after an experience like that.

That, that is just how much of a movie vibe this book has. And I mean it in the most complimentary of ways.

Falling tells of an impossible situation. Bill is a trusted senior pilot. He loves his job and he loves his family, but sometimes he finds himself caught in the middle. Like on days when the novel opens, when he's called in urgently to work to fly from one side of the United States to the other, when he'd previously asked to have the day off, because it is his ten year old son Scott's first Little League match of the season. Although both Bill--and Scott--are understandably disappointed, Bill leaves for the airport and promises to make it up to his son. Then something terrible happens.

Or to be more specific, Bill's family are taken hostage. And then Bill finds himself faced with an impossible choice. For his family to live, Bill must crash the plane and kill everyone on board. He must not tell anyone else on board what is going on. And there's a terrorist on board the flight, making sure that he follows orders.

What will Bill do?

What would anyone in that situation do?

The premise alone is both frighting and intriguing. The delivery is suspenseful, fast paced and chilling.

And without giving away any spoilers, the ending is brilliant.

This is the perfect read for anyone looking for a book that is twisty and action packed. The author is a former flight attendant and her knowledge of the airline industry and aviation shows. It's very difficult to fault this book at all, especially when it delivers on everything it promises.

Perfect for anyone looking for a suspenseful, heart stopping read.

Thank you to Simon and Schuster Australia for my copy of Falling.