Review: The Ballad of Songbirds and Snakes by Suzanne Collins 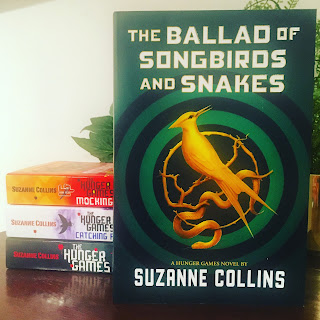 I doubt that anyone ever expected that there would one day be a prequel to The Hunger Games, least of all me. And if I had ever, for a moment, expected one, I never would have dreamed that the prequel would focus on a young Coriolanus Snow. After all, President Snow from The Hunger Games was old, horribly corrupt and selfish to the core. And YA heroes are supposed to have a heart of gold ... aren't they?
The Ballad of Songbirds and Snakes takes readers on a very surprising ride. Set during the Tenth Hunger Games, the novel introduces us to Coriolanus Snow as an eighteen year old student living in the Capital. On the outside, his family have it all, tradition, a good name and wealth. But as Snow knows only too well, appearances can be deceiving. His family have little money following on from the war and he knows that the only way out is to get a good education. But, it seems, his school will require him to mentor the Female tribute from District Twelve for this years Hunger Games. And, it seems, there are also some very sinister forces at work within the school. Who can Coriolanus trust?
More importantly, who will he be willing to betray?
Some of the twists and turns in this one amazed me. Lucy Gray was not only a force to be reckoned with, but one too good for her mentor in every respect. Her part in the story is as tragic as what one would expect. Snow is arrogant from the outset, though the influence of a professor and manipulations who is as insane as she is evil, certainly help to bring out the worst in him. Snow's a difficult character to feel sorry for, but he's also in a near impossible situation.
Although this one isn't quite as memorable as the series that inspired it, I enjoyed the many twists and turns and reading about a main character that I loved ... to hate.
Recommended.
Suzanne Collins The Ballad of Songbirds and Snakes