Review: The Boy Who Steals Houses by CG Drews 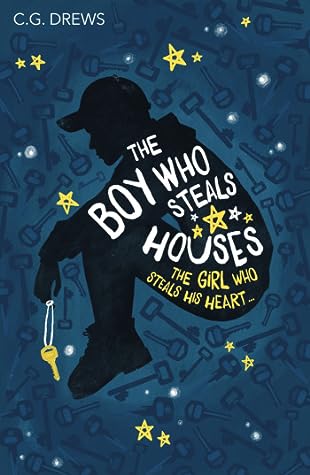 Sammy Lou needs somewhere to live. Let down by all of the people who were supposed to love and care for him, he ends up homeless and surviving the only way he knows how--by breaking into empty houses, sleeping there and leaving the next morning before he can be caught. Then, one fateful day, he breaks into the house that belongs to the De Lainey's, a big family, full of people who have even bigger hearts. When he is found, each of the De Lainey kids just assume that Sam is a friend of one of the other kids, and he ends up sticking around for a while. However, Sam has some dark secrets from his past, and a brother with a disability who may be in serious trouble, and he knows that this friendship cannot last forever. The De Lainey's will never accept him once they know what he has done ... will they?

This novel was a pleasing read that addresses some serious issues in a way that is relevant to the target audience. In particular, I was impressed with the way that the author addresses the topic of violence, how it can be learned at a young age and how that cycle can be broken. It also raises the question about the difference between violence as self-defence and hitting someone out of anger.

The De Lainey's are portrayed as a busy but loving family and they melted my heart just a little. But where the novel really shines is with it's portrayal of Avery, Sam's older brother who is autistic. The portrayal of Avery is both real and sympathetic and is described to readers in a way that does not talk down to the audience as can so often by the case. (Though I have to admit, I was a bit surprised that he was not in a school or class for kids with special needs.) While I found the initial concept of Sam breaking into houses and never getting caught to be a little far fetched, I was willing to overlook this and other flaws and found myself caught up in the story.