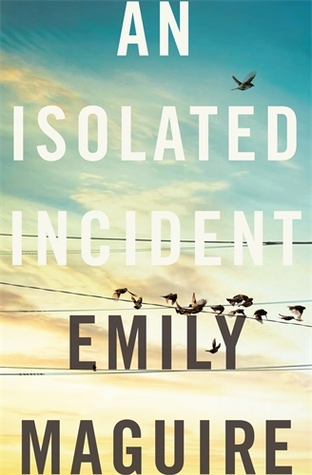 Not since I read Janet Turner Hospital's Oyster back in university has a novel ever left me feeling quite so depressed. And there is no doubt about it, An Isolated Incident is not an uplifting book. It also was not intended to be. This is a proudly feminist novel about sexism, violence, small town prejudice and the media circus that always follows the violent (and unnecessary) death of a young, beautiful woman.

An Isolated Incident follows Chris, a street smart thirty-something, living in a small town halfway between Melbourne and Sydney, whose younger sister is abducted and murdered on her way home from work. It also follows May, a journalist from a start up digital press who is keen to get a lucrative exclusive.

And mostly it follows both women as they navigate a world where they are both secondary to a sense of male entitlement, and the impact that this particular crime has on them both.

An Isolated Incident has been longlisted for the Stella Prize and it is not difficult to see why. Maguire has a track record as a talented Australian author. And there are no doubts about it--this is an exceptionally well written novel. I found Chris' voice utterly believable, as a woman who has learned to survive in a world that is, quite frankly, hostile to her gender. I found myself feeling sorry for her at times, and angry with her at others, and that's testimony to the fact that this novel is well written. It's also not terribly cheerful and that's something of a challenge for an artsy and vaguely intellectual optimist such as myself.

Plus I got angry that the book made me feel so damn angry in places.

My final verdict? An Isolated Incident is an important novel, even if it does not make for comfortable reading.