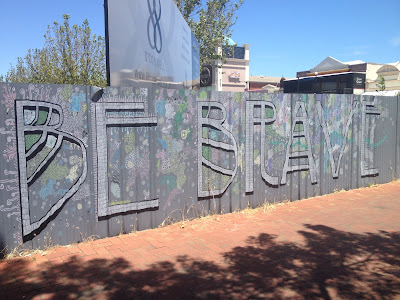 This fence borders the old Le Cornu site in North Adelaide. Once the home of a large and thriving furniture showroom (I'm too young to remember it, but apparently it had a rounded glass window that looked quite spectacular,) the business moved out of the building, which was then demolished. Over the years (I understand Le Cornu left in 1986,) there have been many plans for the site, none of which have ever got off the ground--literally. (The most recent of which was a luxury hotel, which may or may not still happen.) Instead, the site has become a vacant lot in the middle of what should be prime, city real estate. (It's also considered by some to be Adelaide's greatest eyesore.) Anyway, recently, someone decided to pretty the fence. And I think it looks great. A simple message, against a grey background.