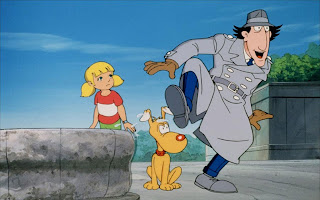 CARTOONLAND--Child Welfare experts are calling for an immediate end to laws allowing cyborgs to adopt children. "Frankly, the situation here in Cartoonland is out of hand and the problems are only getting worse," child welfare expert, S Claw, PhD, told our reporters. "We've had one shocking instance of an eight-year-old girl who was adopted by a particularly hapless Cyborg Detective who appears to have left the important parts of parenting up to the family dog. There is also the question of the child's physical safety. Since her adoption by her cyborg 'Uncle' this child has been placed in numerous dangerous situations and has been abducted by various crooks and enemies of the state practically every week. The physical and psychological scars must be enormous."

The child, dog and her 'Uncle' were reluctant to speak with our reporters outside court. While the child spent most of her time staring at what appeared to be an oversize iPad, her Uncle simply shouted, "Go-go-gadget Copter," before flying away with his niece and dog. The trio then crashed into the side wall of a public convenience. All injuries were minor.
Inspector Gadget Kathryn's Inbox Exclusive