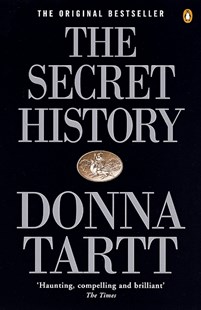 Over the years, I have often joked that I never trust anyone who tells me that The Secret History is their favourite novel. Mostly, this is because it is one of those big, precocious novels, written when the author was still in her twenties when it was published, it's long and it engages with some dark themes that some readers mistake for truths. In other words, there is a certain element of people out there who claim it is their favourite book to try and appear smart. Then there is the smaller, and more dangerous readership, the ones who have read it and who love it because they over-identify with the main character, Richard Papen, who is spineless, lacks empathy for others and his whole part in the novel is due to the fact that he desires to be a part of an elite group.

The Secret History opens with a murder. More specifically, Richard Papen, part of a closed group of eccentric students at a university in Vermont, lets readers in on the secret, that he and the others have just killed a member of their group? Why? To get the answer to that question, we go back in time, meeting Richard as a lonely and friendless misfit, a scholarship kid, who aspires to study Ancient Greek at university. Unfortunately for Richard, the teacher is somewhat of an eccentric, and he only opens his classes to a very select group of wealthy, and equally eccentric students. Against the more sensible advice he is given by some of the college professors, he engages in a brief campaign to win them over. His trick works, and he spends well, the rest of the book doing his damnedest to fit in with a group of eccentric and ultimately damaged people, to the point where he thinks nothing of it when he leans that four of them killed an innocent man during a bizarre ritual. And then he assists with the murder of the fifth member of the group, who has his own selfish reasons for not wanting them to get away with murder.

And then comes the long second half of the novel, where each of the group deals with the fallout, and both Richard, and the reader learn just how ugly they can be.

This is the second time I have read The Secret History. Older and wiser now, I didn't hate it quite so much as I did the first time around, and certain things were easier to spot. Richard's lack of empathy and how that becomes a useful tool for Henry. The similarity between Bunny's family and certain other rich and famous American families. The many references to various works of literature. The unflinching depiction of groupthink in its most vile form.

The Secret History is a pretentious book, about a bunch of people who are, for want of another description, not very nice. What the reader makes of it will very much depend on what they are looking for, whether they feel sorry for Richard. And whether they consider the fact that the novel is dedicated to the author of American Psycho to be a plus or a minus. And whether they consider the lives of the students to be something parallel to a Greek Tragedy, or a load of pretentious rubbish, done purely for shock value. (Then again, is there really that much difference?)

For me, The Secret History remains a book that I love to hate. I'm reluctant to say I enjoyed it, yet I picked it up to read just another page or two whenever I had a spare moment.

And try as I might, I simply cannot write a review that does this book justice.