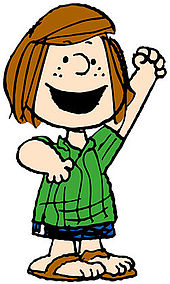 Today I thought I would pay tribute to another of my favourite characters from Schulz's brilliant Peanuts comic strip, Peppermint Patty. As crazy as it sounds, Peppermint Patty was actually my hero for a little while, when I was about eight or nine years old. (In fact, once at school my teacher, that darned Mrs Pettingill asked us to each draw our self-portrait. I remember all the other boys and girls in the class drawing these beautiful portraits of themselves. I drew a picture of myself looking somewhat like Peppermint Patty. Loyal followers of this blog will not be surprised to learn that this led to a showdown between me and Mrs Pettingill who, as usual, failed to understand my artistic sensibilities. Then again, what did I expect from a primary school teacher who point blank refused to admit salt is sourced from seawater?)

Looking back, I think what I loved about Peppermint Patty was that she was not a stereotyped little girl. Peppermint Patty was a tomboy, she made mistakes and was often portrayed as being lovably, foolishly human. Unlike Lucy who was crabby, Sally who was pragmatic and Marcie who was a realist, Peppermint Patty was the optimist of the female characters. (Note: by the time Peppermint Patty became a regular character, Violet and Patty had for all intents and purposes left the strip.) Often, this blind optimism could make Peppermint Patty appear quite foolish--for example, for a time she believed that Snoopy was a funny looking kid with a big nose that Charlie Brown knew and refused to accept that Snoopy was a beagle. More worrying is her crush on Charlie Brown, who she knows as "Chuck". Often the character attempts to put words into his mouth and make it appear that he is the one with a crush, however, it is obvious to readers of the comic strip that the reverse is true. Poor Charlie Brown is often left red-faced and will pretend not to understand Peppermint Patty's words. (After all, Charlie Brown's heart lies with the little red haired girl.) However, it is clear though his actions that he does like and, more importantly, respects Peppermint Patty as a friend.