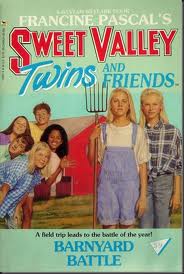 The first of many Sweet Valley High spin-offs, Sweet Valley Twins debuted in 1986. The premise was simple. The series starred a twelve-year-old version of Elizabeth and Jessica Wakefield and a number of their friends and foes from the Sweet Valley High series. The books were pitched at a slightly younger audience than Sweet Valley High and typically revolved around the adventures of the Wakefield twins or one of their many friends. Problems were typically solved without the help of adults and involved the kids teaming up in one way or another--often with humourous results. For example, in Sweet Valley Twins #17 Boys Against Girls the girls in Elizabeth and Jessica's homeroom team up to pay their sexist teacher a lesson. Other books in the series touched on social issues, though never with the believability or depth of The Babysitters Club, which would remain the series main rival during its twelve year run.

The series soon expanded to include Super Editions (longer non-canonical adventures, Super Chiller Editions (longer non-canonical adventures with a paranormal theme,) and two sub-series Team Sweet Valley and The Unicorn Club. It was eventually replaced in the late 1990s with Sweet Valley Junior High, which featured Jessica and Elizabeth as eighth graders at a new school without their many friends from Sweet Valley Middle School. Like Senior Year, the series includes characters from a diverse range of backgrounds instead of the predominantly white, middle class kids that appeared in Sweet Valley Twins.

Numerous characters from Sweet Valley High, including big brother Steven Wakefield, appeared in the series. Snotty Lila Fowler remained Jessica's frienemy, while Todd Wilkins remained Elizabeth's love interest, Winston Egbert the class clown, and Bruce Patman the spoiled bad boy. (These characters would later become the stalwarts, appearing in each Sweet Valley series, with the exception of Elizabeth) Other familiar characters who made an appearance were Aaron Dallas (who would be Jessica's occasional love interest and who, many years later would become engaged to her brother,) sporty Ken Matthews, gossipy Caroline Pearce, chubby Lois Waller (who much like Sweet Valley High seemed to exist solely to be made fun of,) and sensible Julie Porter.

Rounding out the large cast were several new characters. Amy Sutton was Elizabeth's best friend, and was later written in to the Sweet Valley High series, though she underwent a major personality change and lost numerous brain cells in the process. Former child star Maria Slater debuted in Sweet Valley Twins #50 Jessica and the Secret Star, and was later class president in the Sweet Valley High Senior Year series. Other characters who appeared exclusively in Sweet Valley Twins included Janet Howel, a snobbish eighth grader and president of the Unicorn club. (An exclusive club that Lila belonged to. Jessica also belonged to the club and was  tolerated by Janet only because the older girl had a crush on Steven.) Mandy Miller, Ellen Riteman, Kimberley Haver and Mary Wallace round out the unicorn club along with several other bit players.

Not only did Amy Sutton undergo a massive personality change, going from a reasonably intelligent tomboy to a boy crazy bimbo, but there was another glaring continuity error. In Sweet Valley High, the Wakefield twins were sixteen year olds in eleventh grade. In Sweet Valley Twins, they were twelve year olds in sixth grade. Umm, how did that happen. Anyone who turns twelve three months before the beginning of sixth grade (the twins were born in June) is going to be turning seventeen three months before they begin eleventh grade. Also, book #43 Elizabeth's First Kiss more or less rehashes the events that occurred in the first Sweet Valley High novel, albeit aimed at a younger audience. (Jessica likes Todd. Todd likes Elizabeth. Elizabeth likes Todd. Jessica schemes to keep them apart and fails.) It seems odd this could happen twice.

Each book in the series revolves around a variation of one of several themes.

Rivalry Between the Wakefield twins.

These novels find the Wakefield twins competing with one another in some capacity. For example in Sweet Valley Twins #37 The War Between the Twins Jessica and Elizabeth are working on rival school papers. Elizabeth is an editor for the official school paper. When she rejects an article written by Jessica, Jessica and her friends from the Unicorn club start their own rival (but unofficial) newspaper. In #2 Teachers Pet, Jessica is annoyed because their ballet teacher favours Elizabeth.

Kid with a Problem

These novels find the Wakefield twins helping one of their many friends who have some kind of a problem. For example in Sweet Valley Twins #16 Second Best Elizabeth and Jessica offer support to their friend Dylan who feels outdone by his younger brother. Over the course of the series Elizabeth and/or Jessica would offer help to kids who are orphaned (#58 Elizabeth and the Orphans,) befriend a deaf classmate (#69 Won't Someone Help Anna,) and assist numerous runaways (#26 Taking Charge,  #77 Todd Runs Away, Super Edition #3 The Big Camp Secret).


Elizabeth's love interest in the series is Todd Wilkins, Jessica's love interest is Aaron Dallas. The romances don't go much further than a quick kiss or dancing in the school gymnasium, but various books are devoted to these budding romances including, #43 Elizabeth's First Kiss, #66 The Great Boyfriend Switch. However, the most unbelievable romantic moment is saved for #79 Jessica's Blind Date, when Jessica responds to an ad in the newly established personals column in the sixth grade newspapers. Because, you know, all sixth grade newspapers run personals columns.


These novels involve one twin or one of their friends doing something silly and them getting themselves further and further into trouble. For example, in #11 Buried Treasure, Jessica and her friend Ellen find one hundred dollars buried in a tin inside Ellen's back yard. Together, they decide to spend the money, but not tell anyone where they found it, just in case they get into trouble. That same week, some money goes missing from the school and Ellen and Jessica are blamed. In #73 Lila's Music Video, Lila wants to record a music video, but has a terrible voice and hires another girl to do the vocals while she lip syncs. Naturally, the song is a huge hit and everyone thinks that Lila is a talented musician.

A New Kid in Town

The new kid at Sweet Valley Middle School was nearly always disliked by their classmates initially for one reason or another. When Nora Mercandy arrived in #3 The Haunted House she was shunned by her classmates because they believed that her grandparents were zombies and their old mansion was haunted. (Naturally, Elizabeth discovers the truth, that Nora's grandfather is a former magician who is now suffering dementia.) In #6 The New Girl, Brooke Dennis was disliked for being rude and snobbish to her classmates, who then decide to play a cruel prank on her. Once again, Elizabeth saves the day after she discovers the reason for Brooke's behaviour.


The Super Editions usually to the Wakefield twins and their friends out of Sweet Valley and on an unpredictable adventure. In Holiday Mischief the twins travel to Washington with the school choir, where they help a classmate reunite with her long-lost brother. In The Big Camp Secret the twins help a friend who has run away from home hide out at camp. In The Unicorns Go Hawaiian Jessica wins a trip to Hawaii. The very first Super Edition The Class Trip was arguably the strangest, where Elizabeth finds herself in a strange land after hitting her head. And then, of course, it all turns out to be a dream.


The Super Chillers and Magna Editions were non-canonical (for example, it was Christmas on at least four separate occasions and dealt with various paranormal themes, in one book, Elizabeth became friends with a ghost, in another, the dolls the twins receive for Christmas come to life.


All in all, Sweet Valley Twins is a fun, lightweight series that never takes it too seriously. It's probably the literary equivalent of junk food, but what's life without the odd cupcake every now and then?

Unknown said…
This book sounds fantastic, cant wait to try it out for myself!
New follower
-Buffi
My Wonderfully Dysfunctional Blog
23 June 2012 at 01:17