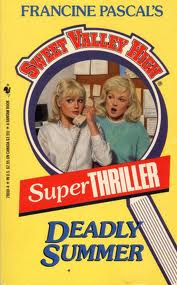 When we left off, the real Elizabeth Wakefield was escaping a desert island in a leaking row boat. Meanwhile, cleverly disguised as Elizabeth Wakefiled, Margo was planting a bomb under Todd Wilkins patio, in order to destroy the citizens of Sweet Valley. Will she succeed? Find out in the explosive finale of Sweet Valley High #182 Elizabeth's Psychosis.

'Ten ... nine ... eight ...' Sitting in a tree outside Todd Wilkins house, Margo stared at her watch and smiled. It was eight-thirty and Todd's welcome home party was in full swing. And in just a few seconds, Margo thought, the party would come to an explosive end ...
Elizabeth Wakefield stared down at the complex series wires. It was lucky that Margo had opted to destroy Sweet Valley with a bomb, Elizabeth thought, seeing as Elizabeth had just recently completed her Junior Counter-Terrorism Class at Sweet Valley high, in which she had learned to safely defuse bombs and to phone the terrorism hotline every time that she saw a foreigner. Which had caused a little bit of confusion when Elizabeth had discovered that her Counter-Terrorism teacher was actually British and she had promptly called the hotline. Still, Mr Windsor had been awfully nice about the whole thing and even sometimes sent Elizabeth postcards from his new home in Guantanamo Bay.
Elizabeth smiled, as the bomb was safely defused. Meanwhile, from the car, Margo was growing impatient. Why had there not been any explosions? Sighing, Margo climbed out of the car and walked in the direction of Todd's house.
"Looking for something?"
As Margo entered the house, she was confronted by an angry Elizabeth Wakefield. Behind her were all the other kids from Sweet Valley, and the sole adult who was supervising the party, Todd's Aunt Lindsey. (So far, Aunt Lindsey had spent most of the party convincing Jessica to sell bags of her special new talcum powder that was designed for the inside of ones nose, before departing upstairs to show Winston something that was even more exciting than his collection of Archie comics.)
"A bomb, perhaps?" Elizabeth continued.
"Umm, yes." Margo forced a smile. "Silly me, I left it here during my last visit."
"Well, that's all right then." Todd flashed Margo a smile in return. "I guess Margo wasn't trying to kill us after all."
"Don't be an idiot Todd." Elizabeth sighed. "You know how this turns out. The killer is always Margo, back from the dead, or escaped from prison." 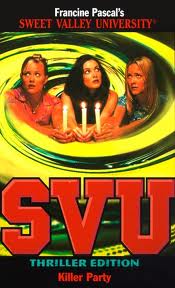 "Oh, yeah," Todd murmured, as Sergeant Mashall slapped a pair of handcuffs on Margo and thanked Elizabeth for a job well done. "Oh well, if that's all over, do you think we could get back to the party now?"
"Sure!" Elizabeth laughed as Margo was hauled inside a police car. Meanwhile, Margo was smiling. Fools. They may have found the bomb, this time, but she would get them all one day. Just you all wait, she thought. Just you all wait ...
Will Margo ever succeed in her plans to destroy Sweet Valley. Look out for our exclusive lost Sweet Valley University book, where Margo teams up with Sweet Valley's other criminal mastermind, William White ...
Sweet Valley High