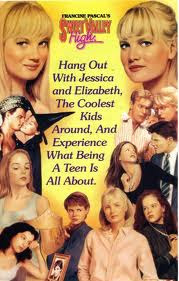 And now for the next exclusive installment of The Lost Sweet Valley High novel, Elizabeth's Psychosis.