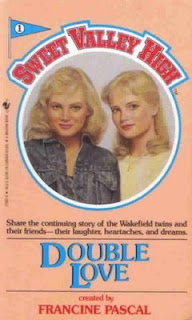 For those of you who don't know, or perhaps more accurately were not teenage girls during the 1980s or 1990s, Sweet Valley High was a best-selling series of teen romances starring twins Jessica and Elizabeth Wakefield. Created by Francine Pascal and written by a team of ghostwriters, which included script writer Rodney Vaccaro, Sweet Valley High spawned an impressive 181 novels released over a period of almost 20 years. There were also numerous spin-offs aimed at various age groups, Sweet Valley Twins (later repacked and re-named Sweet Valley Twins and Friends,), The Unicorn Club and Sweet Valley Junior High for preteens, while older teens could graduate to Sweet Valley University, Secret Love Diaries and Elizabeth. Sweet Valley Kids, a series of junior novels featuring the Wakefield twins at age six, rounded out the franchise. In 2011, Francine Pascal released Sweet Valley Confidential a novel detailing what happened after the Wakefield twins grew up. More recently, it was announced that Sweet Valley High may be made into a musical. Exciting news. However, what many fans may be unaware of is that there one Sweet Valley High novel that never quite made it to print. And okay, there may be some doubts regarding its authenticity, given that the novel was written in crayon and the only known copy was found in a dumpster outside McDonalds (or should that be outside the Dari Burger?), but Kathryn's Inbox is pleased to share with you this lost novel...

It was another gorgeous day in Sweet Valley. "What a gorgeous day!" sixteen-year-old Elizabeth Wakefield remarked as she pulled open the curtains. Elizabeth Wakefield lived in Sweet Valley, a small town in Southern California where nothing much ever happened, apart from every Christmas when one lunatic or another tried to murder either Elizabeth or her twin sister, Jessica. Last Christmas it had been a ski instructor called Lucas, who had tried to murder Jessica. The Christmas before that, a girl called Nora had abducted Jessica and kept her chained inside the boiler room at Sweet Valley High School with the intention of murdering her, but had been foiled by Elizabeth and her boyfriend Todd. Or maybe it had been Elizabeth and Jessica's boyfriend, Ken Matthews? Or had Jessica been dating someone else then? Elizabeth struggled to remember. There had been so many murders at Christmastime in Sweet Valley that it was difficult for her to remember the details of each one individually. Anyway, the Christmas before that, Jessica had been almost set on fire by her evil fiance, Jeremy. And the Christmas before that, Elizabeth had almost been murdered by Nora's twin sister, Margo, who died, but then remarkably came back to life some two years later, in order to assist Nora with her murders. But then Nora had accidentally stabbed Margo. Or something. Trying to remember it all was giving Elizabeth rather a headache. And then there was the Christmas that Suzanne Devlin had come to stay with the twins and had almost been killed after her bout of mono had been misdiagnosed as MS and had taken some pills without first questioning what might be in them. How many Christmases have I enjoyed as a sixteen year old junior at Sweet Valley High, Elizabeth wondered. Five, six? It almost beat the record of Elizabeth and her friends enjoying four separate Christmases when they were in sixth grade at Sweet Valley Middle School. Elizabeth sighed and tried not to think about it. Besides, who needed logic, when it was such a gorgeous day in Sweet Valley?

Elizabeth looked out the window for a moment or two. She did her best to ignore the group of homeless people who were camping in the vacant lot across the street (perhaps later, if the plot called for it she would bake them some cookies which would no doubt solve all of their problems,) and turned back to her bedroom so that she could admire the off-white walls and her own, all-American good looks in the mirror. Elizabeth wasn't vain, or concieted about her looks (she left that up to her twin sister Jessica,) however, she wanted to ensure that her brand new tattoo, the one on her right breast that said Elizabeth Wakefield and Rick Andover forever was invisible to her parents, Ned and Alice Wakefield. And more importantly that her steady boyfriend, Todd Wilkins wouldn't find the tattoo either.

Elizabeth walked to the bathroom. Suddenly, she heard a strange noise coming from Jessica's bedroom. It sounded as if something was bouncing up and down on the bedsprings. Is that something bouncing up and down on the bedsprings, she thought to herself. (For there was, of course, no one else that Elizabeth could think too. Except when the plot called for Elizabeth and Jessica to have some kind of psychic twin link. Which it nearly always did in the super thriller books.)

That silly Jessica, Elizabeth thought as she walked toward the door. She must be jumping up and down on the bed, like an excited little kid. Maybe I should burst inside the room and surprise her. Elizabeth giggled. This was going to be a good prank. Maybe she could even take some pictures on her phone and paste them on facebook. (The twins had facebook. The twins had always had facebook. It had just conveniently never been mentioned before this volume.) Elizabeth opened the door. "Ah-ha!" She cried. "Gotcha ..."

Elizabeth's voice trailed off as she discovered that Jessica had company. Todd Wilkins was naked on Jessica's bed! "Elizabeth, hi!" Red faced, Jessica pulled a sheet around her and Todd's naked bodies. "We were just, uhh-"

"Uhh, studying for a school project," Todd said, as he desperately tried to hide the pyramid that had appeared in the middle of the sheet.

"Yeah, that's right." Jessica nodded. "You remember that join project that Mr Collins set me and Todd? The one about naked horizontal folk dancing?"

"Todd was showing me how to do the dance." Jessica giggled.

The whole thing seemed highly improbable, but because Elizabeth had a reputation to uphold as a naive goody-goody, she laughed along and aplogised for being so silly, as to think that Todd and Jessica might have been working on something other than a school project. She was about to turn and walk back to the bathroom, when, suddenly, there was a crash from Jessica's closet. Out fell Lila Fowler, the snobby rich girl of Sweet Valley High, followed by Winston Egbert, the class clown.

"That's the last time I ever follow you anywhere inside a closet!" Lila hissed, as she straightened her long, dark hair. "I went in there to get some action and you- You!" Pausing momentarily, Lila pointed a finger at Winston, "Think that I want to look at your collection of Archie comics."

"You were in the closet with Winston?" Elizabeth asked. She felt her heart break. She and Lila had enjoyed a very secret, but very special friendship since the beginning of ninth grade.

Lila opened her mouth and started to say something about Elizabeth and Rick Andover, but Elizabeth quickly changed the subject. "Seeing as we're all here, who wants to bake some cookies for the homeless people across the street?"

"I'll help you Elizabeth." Winston sprang to his feet. "We both will, won't we Lila?"

Lila snorted. "I tried to bake some cookies once and I broke a nail."

Jessica sighed. "No," she said, giving Lila a look that clearly said, Go downstairs. Now! "Lila would be delighted to help you bake cookies Liz. Now if you guys could all give Todd and I a little privacy while we finish our homework ..."

"All right, all right." Grumbling, Lila followed Elizabeth and Winston downstairs. Elizabeth smiled, listening as the bedsprings began to bounce once again, followed by the cries of "Todd, oh Todd..." Horizontal folk dancing, ha! Elizabeth knew what they were really up to. And this Christmas, Elizabeth smiled, it's going to be me doing the murders ...
Sweet Valley High